The Walking Classroom is here! 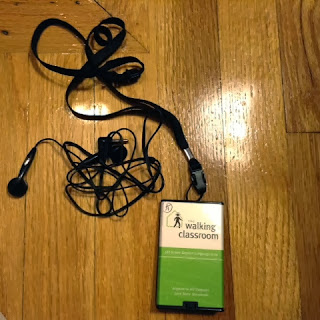 My fifth graders just received a grant from Safe Routes, The Walking Classroom and our PTO to purchase The Walking Classroom. This program combines academic content with exercise during the school day. I believe the program is available for fourth and fifth graders only. www.thewalkingclassroom.orgThe lessons are preloaded onto a portable listening device.(See above picture) Each device came with a container to store the MP3 player in, a headset, as well as a AAA battery. The students walk and listen to the podcast for 20-30 minutes. The lessons are Common Core aligned and come with other materials ( In a very big, easy to read binder) such as discussion questions (pre and post walking) and quizzes. I really like the idea of getting my students up and out of their seats and outside in the fresh air  for 20 to 30  minutes 2-3 times a week. We also received a grant from Safe Routes for a class set of pedometers which I'll be breaking out soon. Yesterday we listened to the first podcast and walked around the gym (it's a chilly 16 degrees in Massachusetts!) Some future podcasts we will be listening to are: Idioms, Casey at The Bat, and the life of Rachel Carson. Some topics match my curriculum, some do not. I am free to choose which lessons I would like my class to listen to.

If you are interested in getting this program into your school start thinking about some funding sources. The PTO was the first place I went to ask for money. I started this process last August and it took 6 months to get the donations in place. I will blog again on this topic in a few weeks and let you know how it is going. Happy trails! Christine
Posted by Mrs. Kennedy at 10:57 AM 3 comments:

Read this great article by Ryan Fuller on Slate. I love the quote,"In teaching, a person can be extremely competent, work tirelessly, and still fail miserably, especially in the first few years."http://www.slate.com/articles/life/education/2013/12/teaching_in_america_s_highest_need_communities_isn_t_rocket_science_it_s.2.html 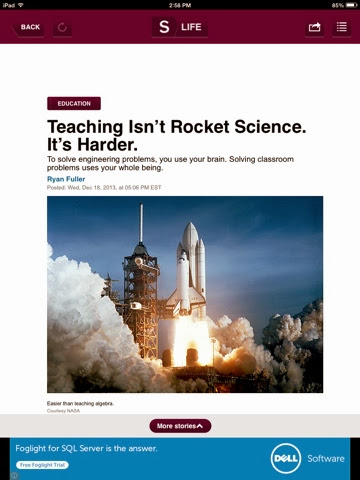 I went to a great two day workshop by Robin Whitacre this week and learned a lot about Dylan Wiliam's 5 key strategies of formative assessment. I love when he says in this video, "The great thing about teaching is it is such a hard job you never get any good at it." ...How true. Christine
Posted by Mrs. Kennedy at 11:55 AM No comments:

Notice and Note and Close Reading

I read anything by Kylene Beers, but this is her best book yet! In it she recommends teaching six "signposts" to help aid students in deep reading comprehension. By page 4 I was hooked! On it is a list of the 25 most commonly taught novels in grades 4-8. Yes! five of my favorites are on the list.  After reading the book I made the 6 posters (see a few below) and dove right in. (It was late May/early June...my favorite time to experiment with something new).The first signpost (I can't say that I really like the word choice, but I can't think of exactly what to call them either!) is contrasts and contradictions. This is when a character in a book acts in a way that is unexpected. The behavior makes you think: Why would the character act this way? Beers and Probst say when this happens in a novel it is a moment to stop and do a close read. We found a contrast/contradiction in the novel Number The Stars. It happened when Papa was on the phone with Uncle Henrick. Papa tells Henrick that their are many cigarettes in Copenhagen if you know where to look. As the reader we know that this is untrue. We wonder about this contradiction. Why is Papa lying? It is a good spot to do some close reading and discussion. 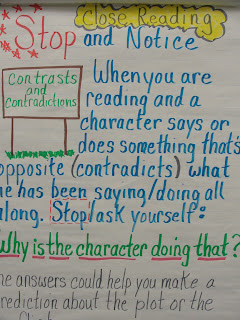 Another signpost that kept surfacing as we read Number The Stars was again and again. We noticed that Lois Lowry mentions the country of Sweden over and over again. Could this mean something? What is the author trying to tell us? This caused lots of discussion and prompted us to look at a map to see where Sweden was located. Hmmm..so interesting that Uncle Henrick's boat is moored so close to Sweden!
I learned quite a bit as an adult reader from Notice and Note. I've read Number The Stars at least ten times and the signposts made me look at the novel with new eyes. Next year I plan to teach the signposts at the beginning of the year and use them with Shiloh, our first novel of the year. Christine
Posted by Mrs. Kennedy at 6:12 AM 2 comments: